Janet Arnold (1932-1998) was an influential figure in the drive for detailed and honest research into historical dress: both the styles and the methods of cut and construction. From her earliest days teaching at Hammersmith Day School and Royal Holloway College, she knew that the students were the key to the future. First however she needed to increase her own knowledge and practical skills before devising ways of making it available to the students and others. Initially for her own interest, she started collecting every piece of evidence relating to dress, whether a paper, a book, a portrait or three-dimensional.

Above: A 1679 Sundial showing the fashionable lines of a woman’s clothing in a three- dimensional form.

As the quantity increased so did the depth of her knowledge. Together with the realization that to preserve the knowledge, both for her own work and for future generations, she had to devise something that she could control. This she did by shooting reel after reel of colour slide film, backed up by notes and B & W film. The sight of Janet, bent over in total concentration as she photographed a garment with a hand-held camera, became well known wherever she worked. She estimated the number of colour slides as being ‘over 300,000’: a unique and irreplaceable gift that has passed to The School of Historical Dress as part of the fruits of her life’s work.

Above: Janet photographing a woman’s doublet of c.1585 in the Germanisches Nationlamuseum, Nuremberg in 1978. The doublet is featured in Patterns of Fashion 3: The cut and construction of clothing for men and women c.1560-1620

For many it was her skill in taking patterns of garments, transferring them to graph paper on a standard scale, that with her annotations, enabled them to follow in her footsteps while looking in awe at her beautiful drawings, a selection of which can be viewed in the gallery at the bottom of this page.

Above: Scale pattern by Janet Arnold for the c.1567 doublet and hose worn by Erik Sture, from Patterns of Fashion 3: The cut and construction of clothing for men and women c.1560-1620

Left: Janet travelling in Spain with Santina Levey in 1973.

She was a charismatic teacher, and much in demand as a lecturer throughout Britain, Scandinavia, much of central Europe and North America. Her home, however, was divided between Bristol where she was born into a family proud of their Devonshire ancestors and London, where she worked. It was to Devon that she returned each summer to live in her caravan writing up notes and roughing-out layouts, while London was for the buzz of a city, theatres, friends, and students.

In her will she made it clear that it was students that mattered most to her. She was proud to be made an elected fellow of The Society of Antiquaries of London and her wish that they would establish The Janet Arnold Award to provide an annual fund for new research work has been honoured.

The School of Historical Dress was given a more complex set of goals; first to finish as many as are feasible of her planned books in the Patterns of Fashion series, of which Patterns of Fashion 4, has been completed by Jenny Tiramani and Santina Levey, increasing its size and introducing full-colour which would delight Janet. Secondly, The School will provide the high-quality teaching that Janet could only achieve on a smaller scale. The whole of the remaining material in her vast archive now belongs to the School.

Above: The slides in their original boxes when they arrived at the School.

Organising the vast number of colour slides of objects that Janet took over the forty years she travelled the world studying and taking patterns of surviving clothing, sculptures, paintings and documents in museums, art galleries and private collections is a mammoth task that has been started by two volunteers, Alice Gordon and Evienna Goodman, but it will take several more years to complete. The slides came to the School in their original slide boxes which needed sorting into each geographical location, institution and specific object. The ordered slides have then been systematically arranged in archival slide holders and stored in fireproof filing cabinets. Once this process is complete each sheet of 24 slides will be photographed, numbered and scanned to form a digital catalogue of all her images. Many of the objects Janet photographed are in private collections, are on display, have been conserved or mounted on mannequins, making them inaccessible for close examination. She took up to 150 detailed images of each object, preserving an invaluable record of its materials, shape and construction.

Unlike the three volumes of Patterns of Fashion published in Janet’s lifetime, Patterns of Fashion 4; The cut and construction of linen shirts, smocks, neckwear, headwear and accessories for men and women c.1540-1660 (published posthumously in 2008) and all future volumes now benefit from full-colour images, many of which will be from her colour slides.

The slide archive has other important functions within the School. Images are used for teaching on our courses and will eventually be made available more widely to researchers elsewhere.

Above: Alice organising the slides and putting them into archival slide holders.

Alice achieved a First Class BA Hons in Costume Interpretation at Wimbledon College of Art in 2010. She founded White Rabbit Lynens in 2011, a company that specialises in the accurate reproduction of historic linen garments, and has had commissions from the Museum of London, Brighton Museum and The Holburne Museum. Her theatre work includes the ruffs worn by Mark Rylance and Stephen Fry in the 2012 original practice productions of Twelfth Night and Richard III at Shakespeare’s Globe Theatre. She also makes garments for many living history interpreters, both in the UK and internationally. 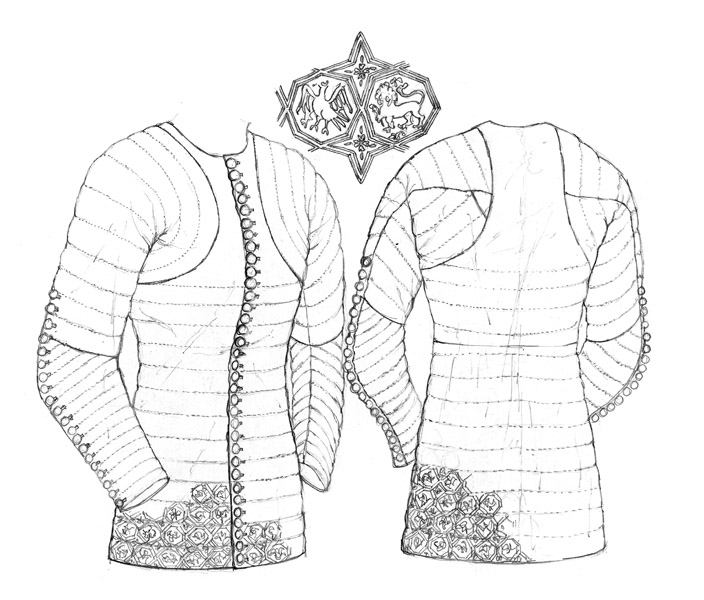 Padded doublet c.1360-70
Said to have been worn by Charles of Blois. Musée des Tissus, Lyon 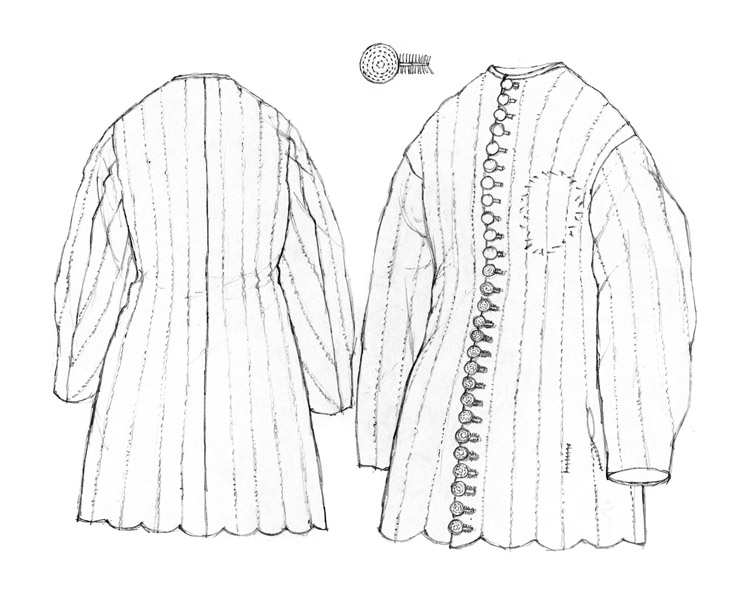 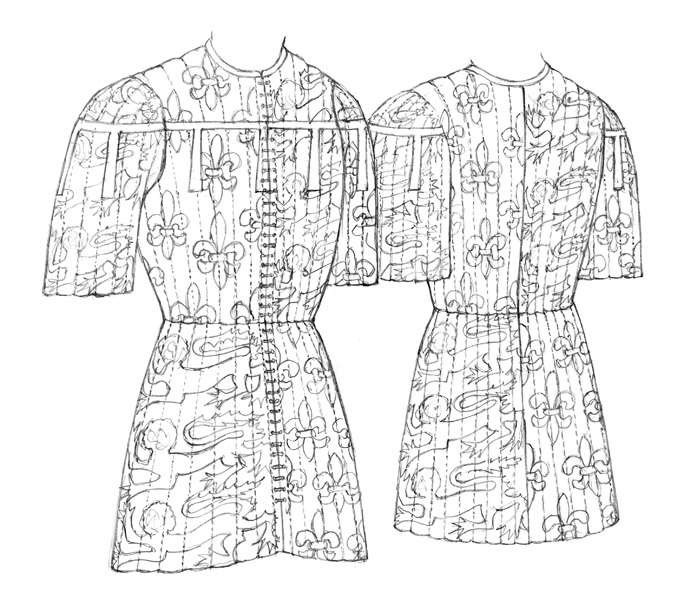 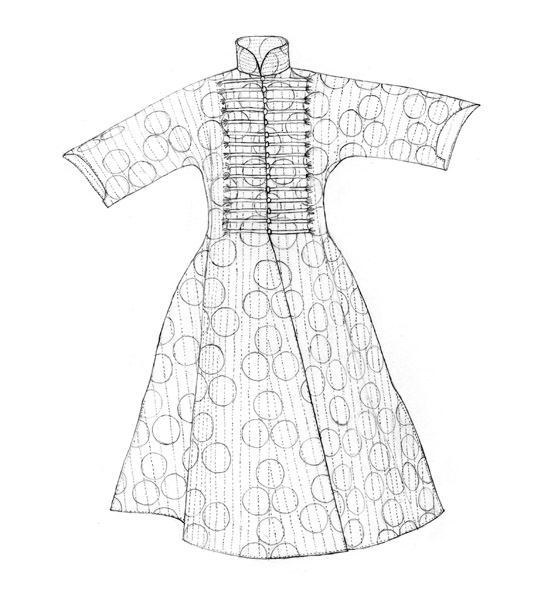 Padded kaftan c.1512-20
Kaftan of red and yellow spotted satin, said to have been worn by Selim I, Sultan of the Ottoman Empire. Topkapi Serayi Museum, Istanbul. 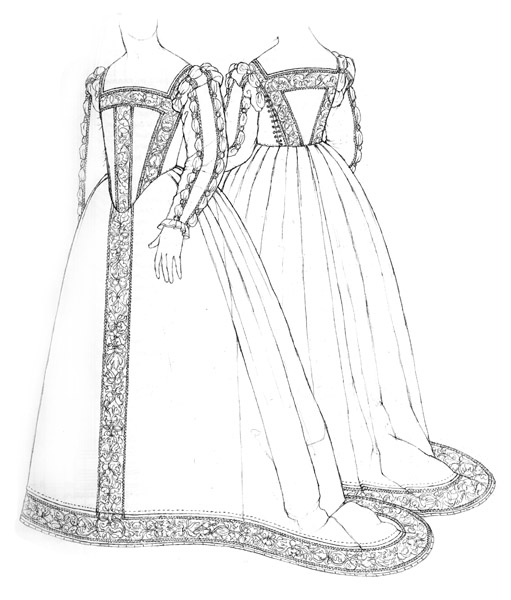 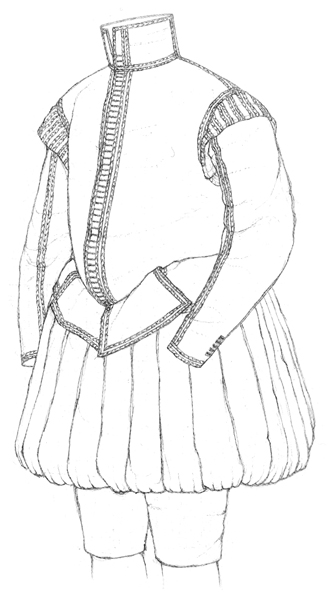 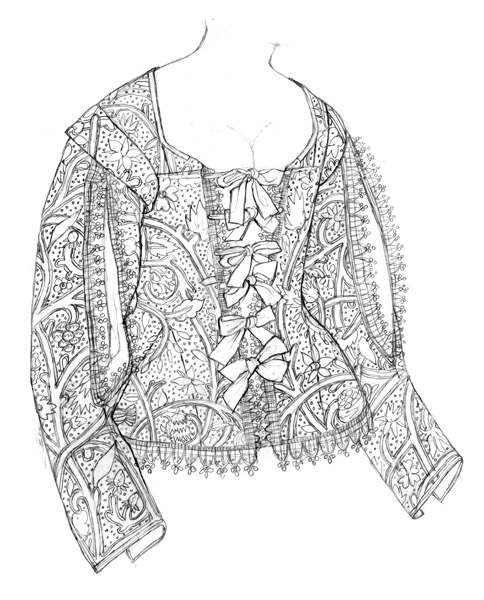 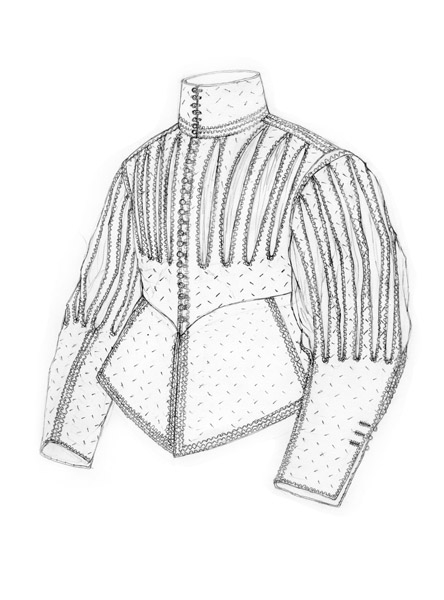 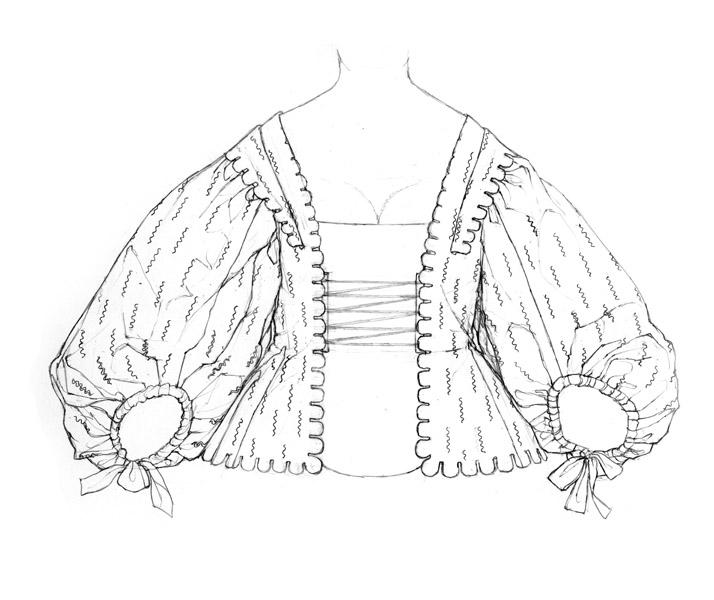 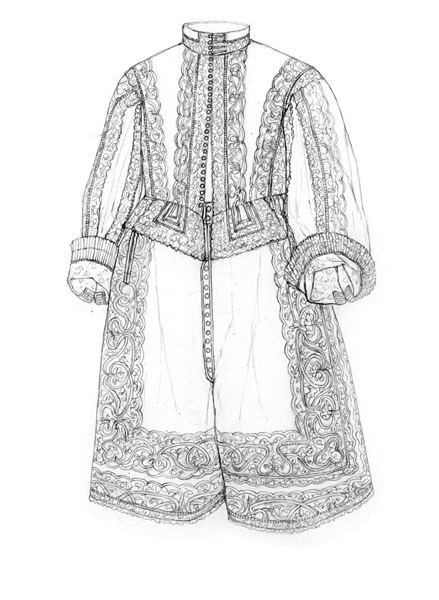 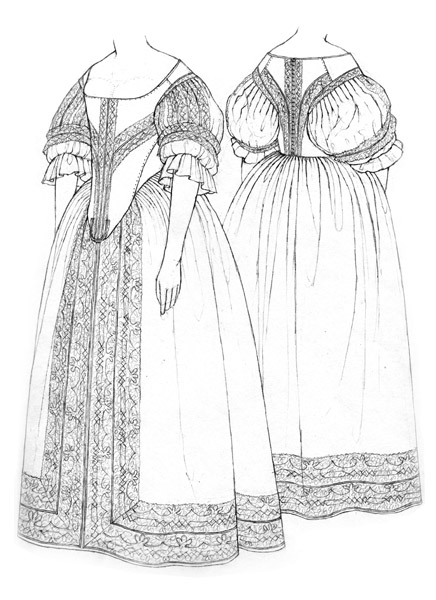 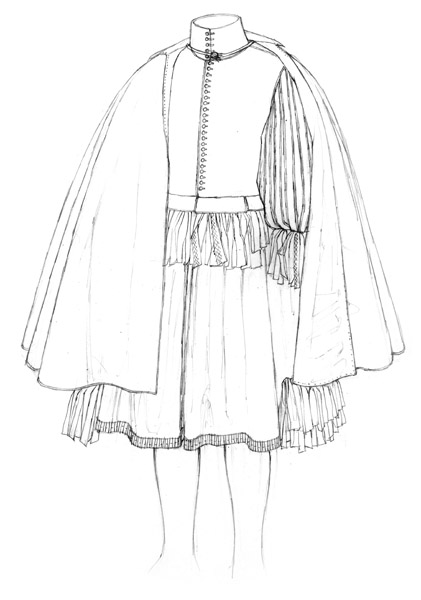 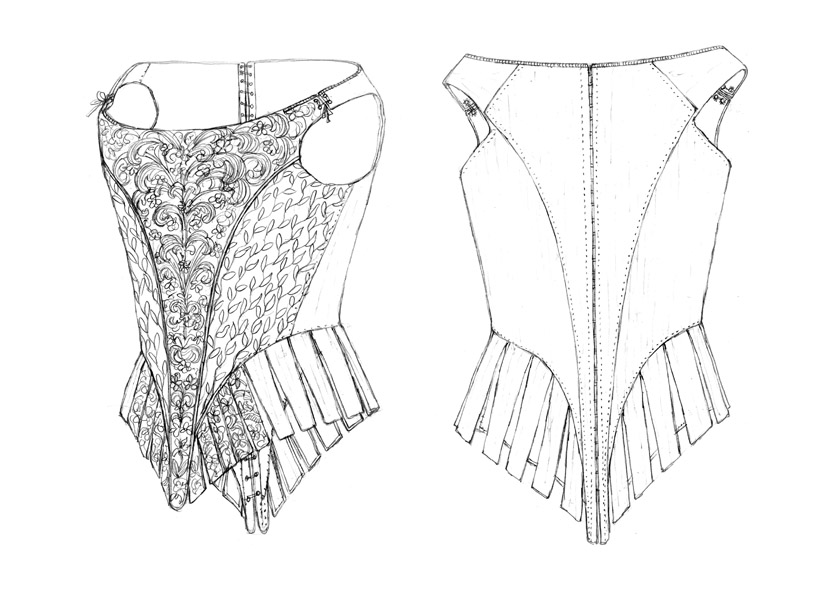 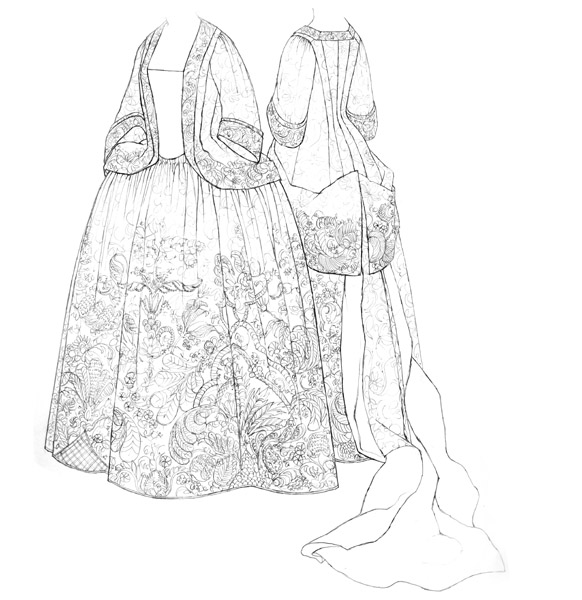 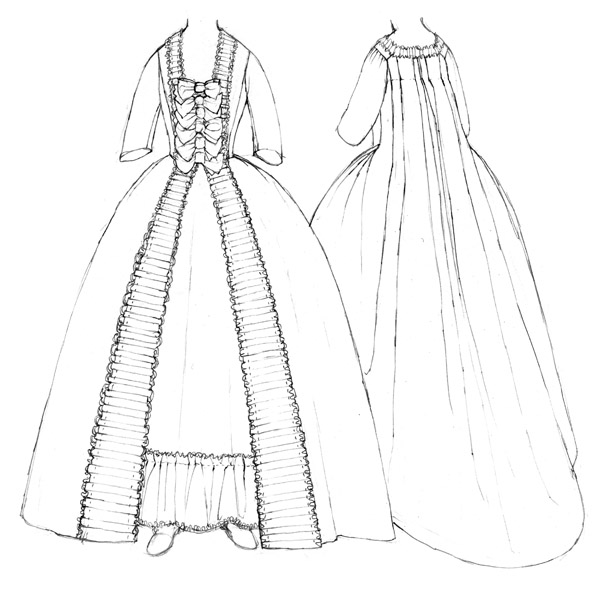 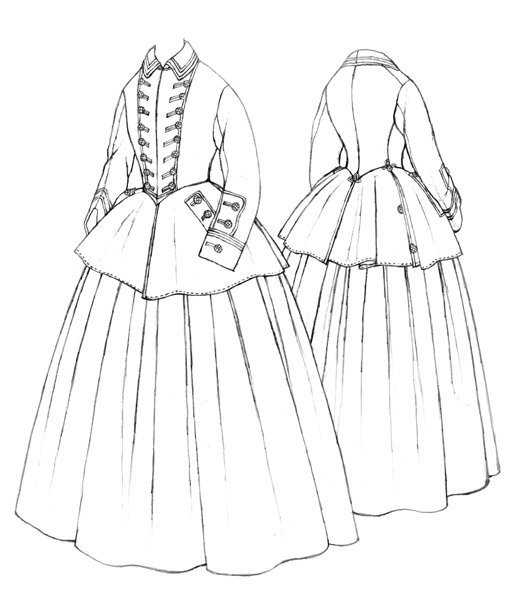 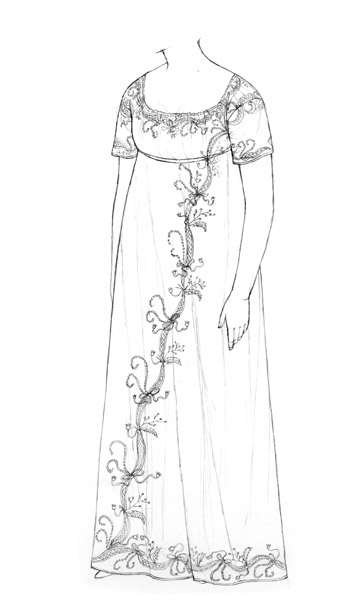 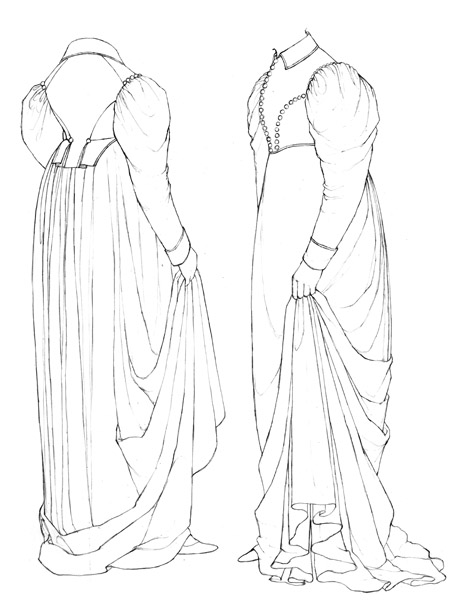 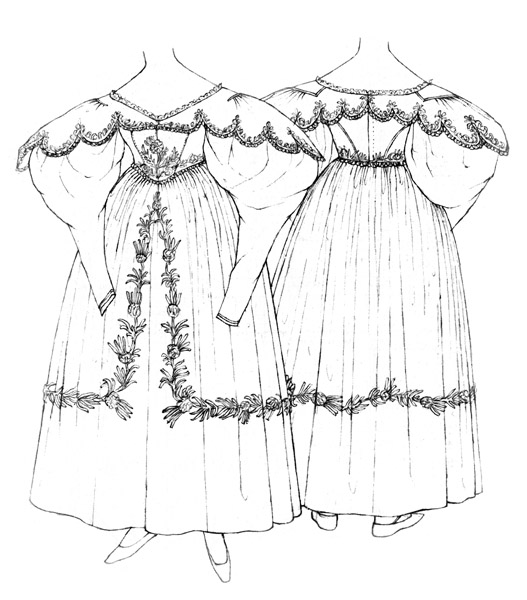 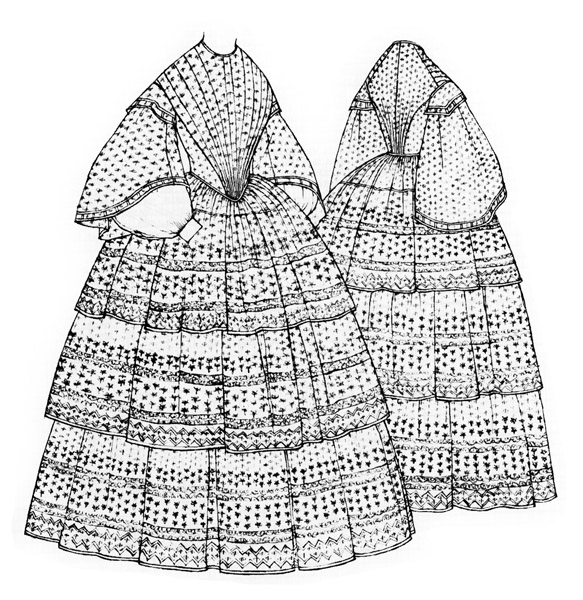 Muslin day dress c.1852-6
A day dress in white muslin printed with a geometric design in black and deep lilac. V & A Museum. 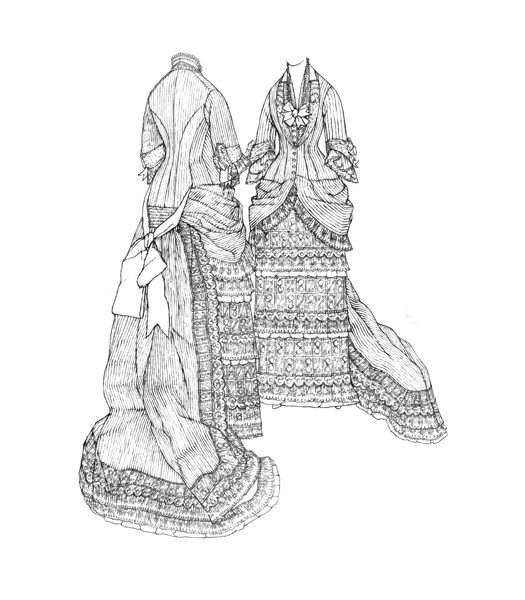 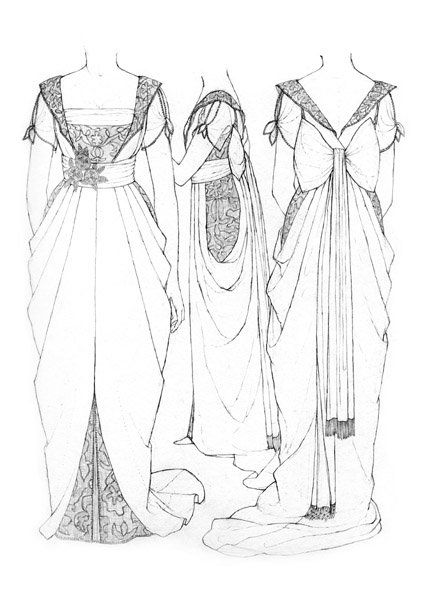 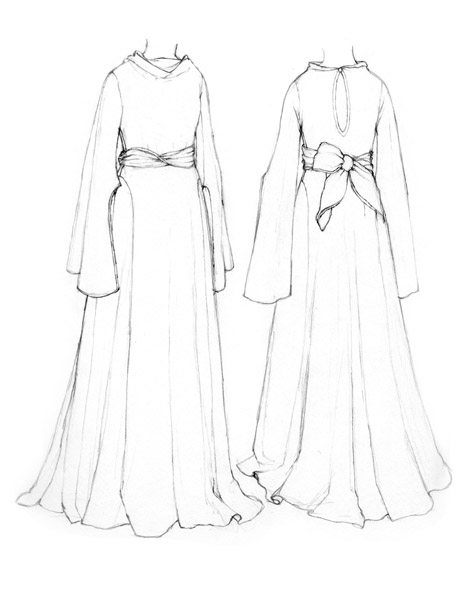 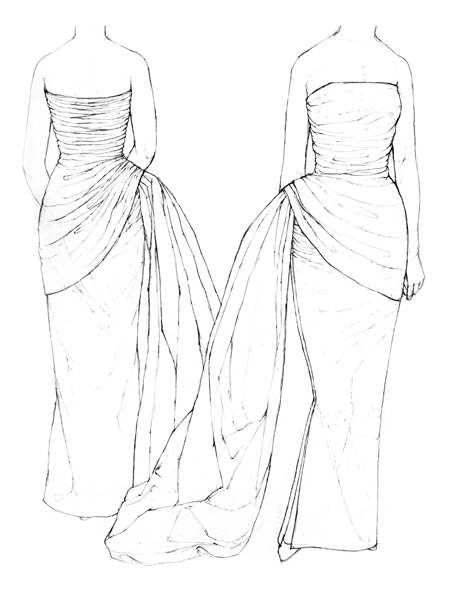